(1) What is the highest mountain in Victoria?

(2) Which multi-national corporation originally took its name from the NSW city of Broken Hill?

(3) All of Western Australia’s 20 highest peaks are in what mountain range? (bonus: What is the highest peak in WA?)

(4) What iconic Australian product was first manufactured by Lance Hill in an Adelaide backyard in 1945?

(1) What word means the biochemical emission of light by living organisms?

(2) In October 2020 scientists made the surprise discovery that platypuses glow green under ultraviolet light. Where was the discovery made?

Answer: United States (from specimens in the Field Museum of Natural History, Chicago, Illinois and the University of Nebraska State Museum).

(3) The insect genus Arachnocampa, endemic to Australia and New Zealand, consists of nine species of fungus gnats. What are their larvae commonly known as?

(4) The Southern Lights (Aurora Australis) are visible from which four countries? (one point each).

(5) Omphalotus nidiformis, a white, gilled mushroom species found in southern Australia, is famous for glowing in the night. What is its common name?

(1) What is the common name of the twining, ground-hugging pea Kennedia prostrata?

(3) Which of the following is not a common name for Hardenbergia violacea? (a) Happy wanderer (b) False sarsaparilla (c) Purple coral pea (d) Native violet (e) Lilac vine.

(4) Complete this Australian phrase: “Jumping up and down like the pea in a … …”

(5) What is the binomial name of the endangered, South East Australian plant known commonly as the Small purple pea or Mountain Swainson pea?

(2) What is the collective noun for a group of quails?

Answer: To be very afraid, to the point of trembling.

(4) Dan Quayle was Vice President to which US President? 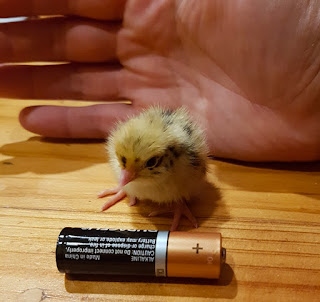 (1) What is the science of dating past events by studying annual growth rings in trees?

(2) What is the nest of a ringtail possum called? (bonus: where does the word originate?).

(3) Platycercus elegans and Platycercus eximius were once regarded by biologists as the two ends of a classic ring species, circling the arid inland (DNA studies have since disproved this theory). What are their common names?

CORRECTION: The quiz master withdraws the above question (3), with apologies. The answer is still ‘rosella’, but it turns out the whole ring species thing with rosellas is far more complicated, and the question is fatally flawed and incorrect.

(4) The age of a bony fish can be determined by examining the annual rings laid down in what bone-like structure in its head?

Answer: A device used to apply rubber rings to castrate livestock (or for docking tails etc.).

(1) Including the pincers, how many legs does a yabby have?

(2) The word ‘centipede’ means 100 legs, and individuals can have between 30 to 354 legs, depending on the species. But do any centipedes have exactly 100 legs?

Answer: No (centipedes always have an odd number of pairs of legs).

(3) The macropod species Thylogale stigmatica is commonly called the Red-legged …?

(4) What is the difference between a tetrapod and a quadruped?

(5) What kind of creature can have up 750 legs – more than any other known animal?

(1) On 1 April, 1957 the BBC’s Panorama program broadcast a now-famous ‘documentary’ featuring the harvest of what tree fruit?

Answer: Announcement that Australia was converting to ‘metric time’.

(3) On 1 April, 1978 what prank did Australian businessman Dick Smith play on the city of Sydney?

(4) On 1 April, 2003, the Sydney Morning Herald published a review of a new restaurant, called Species, which supposedly featured what on its menu?

(5) On 1 April, 2013 South Australia’s Monarto Zoo announced the birth of what strange animal?

Answer: A zebracorn (zebra with a unicorn horn).

This week’s theme: ‘Auto-’
(1) What is an automaton?
Answer: A self-operating machine.
(2) What is autotomy?
Answer: Casting off a body part when under threat (eg lizard’s tail).
(3) What is an autotroph?
Answer: A ‘primary producer’ organism - which can produce its own food using light (usually), water, carbon dioxide, or other chemicals.
(4) What does someone who supports autogeny believe?
Answer: That living organisms can be created from non-living matter.
(5) What is a word meaning to eat or otherwise consume one’s own body?
Answer: Autophagy.
- March 25, 2021 No comments:

(1) What are budgerigars called in the US?

(3) Which one of the following did not have pet budgerigars? (a) Joseph Stalin (b) Adolph Hitler (c) Winston Churchill (d) John F Kennedy.

(4) What Guinness World Record is still held by Puck, a male budgerigar which died in California in 1994?

This week’s theme: ‘Worms’
(1) The world’s largest earthworm, Megascolides australis (aka karmai) can reportedly grow up to three metres long. Where in Australia would you find it?
Answer: Gippsland, Victoria.
(2) Who spent 40 years studying the role of earthworms in soil formation, and published his findings in a book titled The Formation of Vegetable Mould through the Action of Worms?
Answer: Charles Darwin.
(3) Where would you find the giant, fictional worm known reverentially as Shai-Hulud?
Answer: On the planet Arrakis (aka Dune).
(4) Hypolimnus pedderensis was the first species of earthworm recorded to have been sent extinct by human activities. Where did it live?
Answer: Lake Pedder, Tasmania.
(5) What is the missing word in William Blake’s famous short poem: “O Rose thou art sick / The … worm / That flies in the night / In the howling storm / Has found out thy bed / Of crimson joy / And his dark secret love / Does thy life destroy.”
Answer: Invisible.
- March 11, 2021 1 comment:

Here are the answers to the weekly NRMjobs Quiz.

Every Thursday we publish a five-question Quiz, testing your knowledge of trivia, loosely related to the environment, water and natural resource management world.

The Questions are published (along with lots of great job opportunities) in the weekly NRMjobs email bulletin.

There is no prize, except pride. The rules are: no Googling, but you can phone a friend.

Who are we? NRMjobs.com.au is a small business which advertises jobs and opportunities in Australia’s environment, water and natural resource management sector.